The most common causes of car accidents in Australia

Car accidents happen - so what are some of the common causes, and how can you stay safe on the roads all year round?

Statistics from the Department of Infrastructure and Regional Development show that during 2015 there were 1205 road deaths across Australia. In 2016 that number increased to 1300 lives lost, an increase of nearly 8% on the previous year.i

A sobering thought, Jerome reports, is that, “60-70 percent of the patients trauma surgeons treat have been involved in road accidents. Road crashes cost Australia $27-30 billion per year – or $70 million per day, which is the same as the National Defence Budget,” he says. Just think of the difference this money could make if it were available to be pumped into health, education or community services? 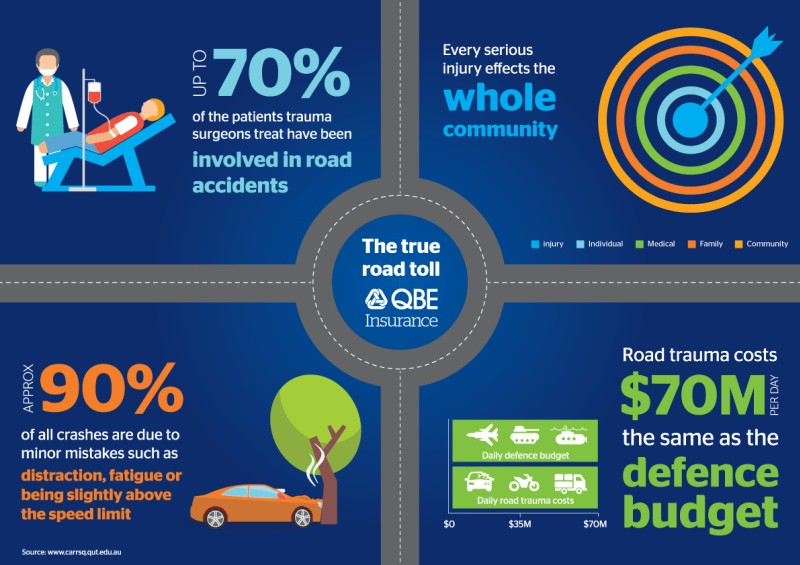 It’s the little things that cause the most accidents

Most car accidents, Jerome reveals, are simply the result of a momentary lapse in judgement or attention. “What people don’t realise is that around 90 percent of all crashes are due to a minor mistake. It’s generally not that someone was on drugs or speeding,” he explains. “It’s just a small mistake such as being distracted, fatigued or going even a little over the speed limit. That’s how the majority of road crashes occur.”

Jerome also states that road rage incidents are on the rise. “A report released in August shows that, while the numbers are still small, the number of incidents involving person to person aggression on the roads have doubled.”

Jerome suggests the best way to avoid a car accident is by taking responsibility, being courteous and cautious and using common sense. “Just because the speed limit says 60km or 100km per hour doesn’t mean that’s the optimum speed for your vehicle, the time of day or the conditions in which you’re driving,” he says.

Extra caution is also advisable around heavy vehicles, Jerome emphasises “Eighty percent of accidents involving a heavy vehicle are not the fault of the heavy vehicle driver but are a result of someone pulling in front of them without realising there’s 70 tonnes travelling behind them. Trucks don’t stop at the same speed as a car. That’s why truck drivers leave so much space. If you pull in too early in front of a truck, you just might end up underneath it.”

Safety features do their job

Jerome also suggests the more safety features your vehicle has, the safer the passengers. “If you have a vehicle with a five-star safety rating, curtain airbags and added safety technology you are far more likely to survive than in a car without.”

“Things happen,” he concludes. “Just take a deep breath and think, do you need to be the first person at the lights? Does it matter if someone indicates and comes in front of you? If everyone just takes a bit more time, we can reduce the number of road casualties.”

What is Compulsory Third Party insurance and how does it work? QBE covers the basics of CTP green slips, what they cover, how to get one and more.

Digital licences: not an excuse to use your phone

Digital driver licences are increasing in popularity. But what impact do they have on mobile phone usage while driving?

How to determine the value of your used car