What to do during a cyclone
Article

What to do during a cyclone

This article was originally published in February 2017 and has been updated.

Tropical cyclones, also known as 'hurricanes', can bring gale force winds, heavy rain and flooding plus coastal storm surges. That’s plenty of potential for danger. So, having a plan to follow is vital to ensure you and your family stay safe during a cyclone.

Tropical Cyclone Advices are issued by the Bureau of Meteorology (BOM), and the advice usually follows one of two categories:

These warnings should not be disregarded – this is your cue to prepare for the cyclone.

Cyclone categories and their risks

Alerts issued by the BOM or local news outlets often describe the likely intensity of a cyclone in terms of a particular category. The table below explains how these cyclone categories work, and what you can expect.

As a guide, Cyclone Tracy, which devastated Darwin in the mid-1970s was a Category 4 cyclone. In 2011, Cyclone Yasi slammed into the coast of Queensland as a Category 5 cyclone. Yasi bought winds of up to 285 kilometres per hour, and remains one of the most powerful cyclones to have affected Queensland since records began.

Sheltering at home during a cyclone

If your area is impacted by a cyclone alert, early action is vital. Top up your car with fuel in case of evacuation, then head indoors taking pets with you, and take the following steps:

If your home starts breaking up during the cyclone, anchor yourself to a strong fixture such as a water pipe or get under a solid table or bed and protect yourself with a mattress, tarpaulin or blankets.

"Make safety your top priority," says Arron Mann, QBE’s General Manager, Claims. "If you’re not sure you’ll be safe at home, head to the local emergency shelter – but only if there is time. Contact the SES on the national phone number 132 500 to find out where your nearest emergency shelter is located."

If you decide to leave before a cyclone hits

Beware the eye of the cyclone

A unique feature of cyclones is the storm's eye, the epicentre around which the winds rotate. When the eye passes over an area, wind gusts can drop dramatically. However, this is only a temporary lull. As the cyclone moves along its path, the destructive winds will return.

"The eye of a cyclone can be deceptive. Don’t assume a temporary fall in wind gusts means the cyclone has passed and it’s safe to go outside," cautions Arron Mann. "It could be the eye of the cyclone passing overhead, and what comes after is often worse. Stay safe by staying indoors."

The best way to know a cyclone has passed is to wait for the official all-clear. After the cyclone has moved on, you can head outside or start the journey back to your home. 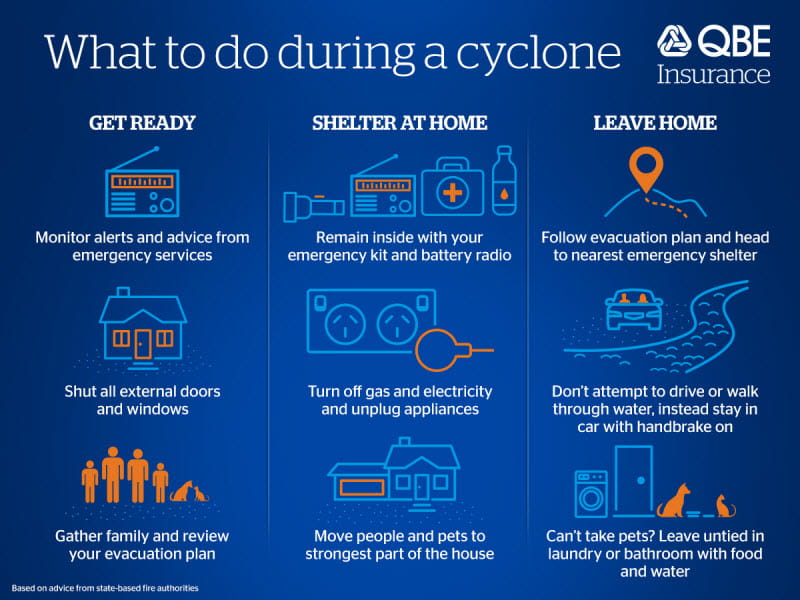 The advice in this article is general in nature and has been prepared without taking into account your objectives, financial situation or needs. You must decide whether or not it is appropriate, in light of your own circumstances, to act on this advice.

Cyclones can be a devastating weather event across northern Australia, know how to prepare for a cyclone.

What to do after a cyclone

The aftermath of a cyclone can bring a new set of hazards. We explain what to do after a cyclone to begin the recovery process safely.

Ready or not? How Australians can better prepare for extreme weather

Australia is known for its extreme weather, however just a quarter of Aussies describe themselves and their homes as prepared or very prepared.