This article was originally published in November 2018 and has been updated.

On average, six cyclones hit Australia’s northern coastline each year in an area spanning the north of Western Australia to north-eastern Queensland. The number of cyclones may sound small but they can have devastating impacts, with an estimated damage bill of $3 billion annually. It makes cyclones one of our most threatening natural disasters.

Australia’s cyclone season traditionally occurs between November and April, however preparing for a cyclone can – and should – start well in advance of this period.

Tropical cyclones, known in some parts of the world as 'hurricanes', start out as low-pressure systems that occur over warmer tropical oceans, including the oceans surrounding the northern and western areas of Australia. A low-pressure system draws energy from the warm waters, forming a convection current of gale force winds and moisture that rotates around a calmer centre known as the cyclone eye.

A cyclone system picks up power as it travels, and while cyclones can start and end over the oceans, they can also make landfall. Torrential rain and flooding, tidal surges and destructive wind speeds of up to 360 kilometres per hour in severe cases can cause loss of life, as well as extensive damage to property and communities.

Unlike many weather conditions, meteorologists can identify cyclone formation well in advance. This gives valuable time for public warnings to be issued, and for homeowners to prepare for what is one of nature’s most furious challenges.

Have a cyclone preparation plan

If you live in a cyclone-prone area – especially if you’ve recently moved there, it’s worth checking with your local council or building authority to know if your home and other buildings meet cyclone resilient guidelines.

In parts of the Northern Territory for instance, most houses and units built since Cyclone Tracy in the mid-1970s, have been designed to withstand winds of 225-279 kilometres per hour. But over time, buildings can deteriorate, and there is no such thing as a cyclone-proof home. That’s why it’s so critical to take early measures to prepare for a cyclone.

Simple steps to take before a cyclone

A useful rule of thumb is to keep your home in good condition. Check for, and repair, any corroded metal work such as roof battens, rotting timbers, and loose fixings. These have all shown to be contributing factors to building damage in past cyclones.

Keep guttering clear of debris and leaves. Repair loose tiles or roofing sheets and ensure they are firmly fastened. Water leakage through blocked or overflowing gutters or loose roof tiles can cause serious damage to walls, ceilings and carpets.

Trim trees and branches close to your home. You may need to check with council if overhanging trees are on public land and consider bringing in an arborist if it’s a particularly large tree or branch that needs trimming.

Fit shutters or metal screens to all external glass areas. Windows and doors can be broken by debris flying around during a cyclone, and when strong winds enter a home, the high internal pressures may increase the risk of roof and wall failure. Secure large items such as garden sheds, boats, trailers and rainwater tanks.

If you’re not confident about your home’s ability to withstand a cyclone, it can be worth asking a structural engineer or architect to take a look at your property and make recommendations.

Understand what your insurance covers

Check if your home insurance policy covers damage, power surges, flooding, tidal surges, and debris removal. You might also want to check your car insurance and cover for other vehicles, such as caravans, to be sure they are adequately protected.

Evacuate or stay during a cyclone – have a plan

If you live in an area where cyclones may be a threat, it’s essential to have a plan and ensure everyone in a household knows what to do if a cyclone approaches.

In addition to checking current warnings from the Bureau of Meteorology, keep tabs on local radio bulletins of an approaching cyclone. You may also receive emergency alerts via your landline phone or an SMS sent to your mobile phone.

Decide in advance the safest place to shelter in your home. This can depend on the cyclone rating of your property, but it is usually a basement, bathroom or internal passageway.

Put together a cyclone emergency kit

Part of your cyclone preparation plan should include putting together an emergency kit that can be stored until needed. Emergency services recommend your kit contain the following items:

Cyclone shelters are community buildings capable of providing protection from winds of up to 300km per hour. Know where your nearest cyclone emergency centre is in case you have to leave your home.

If you receive advice to relocate to a safe place, switch off utilities such as power, gas and water and lock the doors before you leave.

Head to How to stay safe during a cyclone for more valuable tips.

The Bureau of Meteorology is the peak body in Australia for cyclone information and updates. If you have been impacted by a cyclone and need help, the number for State Emergency Services is the same across all states and territories – call 132 500 no matter where you are in Australia. Here are links to the websites of state-based emergency services: 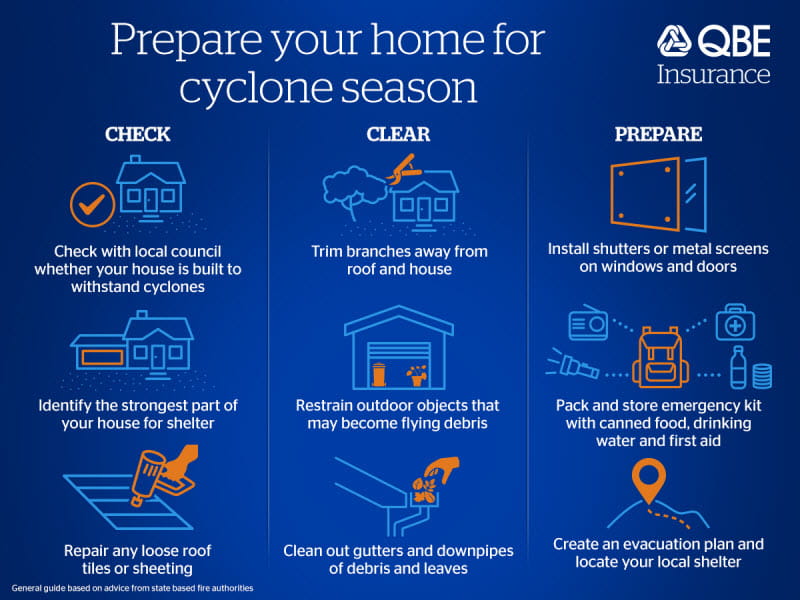 The advice in this article is general in nature and has been prepared without taking into account your objectives, financial situation or needs. You must decide whether or not it is appropriate, in light of your own circumstances, to act on this advice.

What to do after a cyclone

The aftermath of a cyclone can bring a new set of hazards. We explain what to do after a cyclone to begin the recovery process safely.

Ready or not? How Australians can better prepare for extreme weather

Australia is known for its extreme weather, however just a quarter of Aussies describe themselves and their homes as prepared or very prepared.

What to do during a cyclone

Cyclones can bring powerful winds, heavy rain and storm surges. This makes it critical to know what action to take and how to stay safe during a cyclone.